HOPE WOOS FANS IN THE CITY OF LOVE 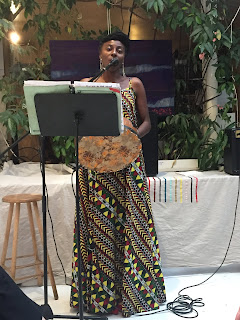 The 2013  Nama  Best Female musician of the year, whose music is a blend of Mbira and afro jazz and Afro-pop showcased her versatility as an artist to the small crowd the small venue could accommodate.

Prior to attending this concert, I'd only been to two performance, a concert at the Alliance Francaise in May 2016, and the Sway Women in Jazz concert featuring Rute Mbangwa, Dudu Manhenga and Prudence Katomeni in 2015.

I went to Hopes concert on Saturday with just the anticipation of watching a fellow Zimbabwean performing in Paris which is a rare treat, I must say. However what I did not expect was to be serenaded and taken down on a nostalgic trip once she put hands on the mbira and did what she was born for.

Another thing that strikes me about her is the strength of her passion. One doesn't need to be a mbira music fan to get hooked because one can't help but get into the groove just by watching how she connected she is to her music, It is as if she and her mbira, the mic and her voice are one, this I believe is the magic that is Hope.

During her concert which lasted for an hour and a half, she seamlessly swapped between Zimbabwean traditional songs and jazz renditions which I think was a calculated risk on her part. She called it experimenting but the risk was worthwhile as she sent fans in a frenzy. Most of the people in attendance save for a few understood the lyrics but the problem was solved by the bilingual director of Art-Z, Olivier Sultan who translated the meaning into French.

In Zimbabwe, I never got the opportunity to have a face to face conversation with the musician who over her decade-long career as a musician has since distinguished herself as an actress of note after featuring in at least two productions including Muzita Rababa where she played the role of an eccentric advisor to a pastor.

Hope also revealed her social side when after the concert she took time to mingle with her fans, something that some Zimbabwean musicians take for granted. I was humbled by this gesture because not so long ago I courted the scorn of many when I wrote about how superstar Oliver Mtukudzi did not like to mix and mingle with the fans.

I remember having a serious fallout with a member of his publicity team over the story I had written for the Daily News, who prior to this incident was a good friend.  But then again, I get that a lot in my quest to tell the naked truth.

Like everyone in attendance at the concert, I got a chance to speak to Hope and discovered that there is actually more to her than the pretty face and amazing voice. The multi-talented artist strikes me as a tenacious and focused woman who takes her business seriously.

We spoke about many things concerning the business and about all things that Zimbabweans talk about when they meet. I was particularly impressed by her knowledge of the industry she finds her self in and how she has managed to keep above the water.

What also caught my full attention was that she resisted so much to talk about the problems that are present in the arts industry in Zimbabwe but instead chose to talk about the opportunities the industry presents and how one can always reinvent themselves just like she did with her acting career.

"The world of make-believe is a good one," she says.

However like all professionals in any field, Hope also raised concerns about the raging cancer of piracy in the country. The government at one time took the matter seriously and set the police on pirates but the blitz only lasted for a couple of months before it fizzled out. Hope believes that if there is the political will to stop piracy, it will be relegated to the archives of history.

During the course of the evening, we found our discussion straying from politics to religion which are subjects  I find myself drawn to. We also spoke about issues affecting women as a whole and touched a bit on the limitation of venues that are conducive to female artists and how most have decided to break the artificial glass ceiling.

"You have to have a thick skin and that's what female musicians are working on," said Hope.

" We just have to go out there and do things that have not been done before and take the bull by its horns," she added on.

On her part, I believe she has also found a way around the issue through the hosting of the Sway Women in Jazz concert in 2015. One of the goals of the concert was to provide a platform for female musicians to perform in a conducive environment.

Female musicians do not hold as many shows and concerts as their male counterparts because of gender roles such as childbearing which may see them having to take time away from their jobs for long periods of time to nurse their children, leaving male musicians at an advantage.

"There's an imbalance and we need to put in a lot more effort to promote female musicians," she said.

Hope is currently here in Europe on a mission to finalise on the recording of her second album after having produced Love and Chocolate a few years ago.

During the course of her10 year sojourn, Hope has graced the stages of the Harare International Festival of Arts (HIFA), Chimanimani Festival, Shoko Festival as well as Exit Festival in Serbia. She has also performed at the Oslo World Music Festival and Mela Festival in Norway, Africarjac Festival, Afro-latinos Festival, Loganberry Festival and Mavambo Festival in the United States of Americ

Here in France, she performed at the Festival de Vents among other notable performances.


Women in a connected world 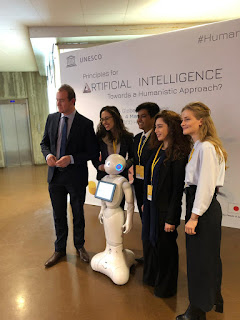